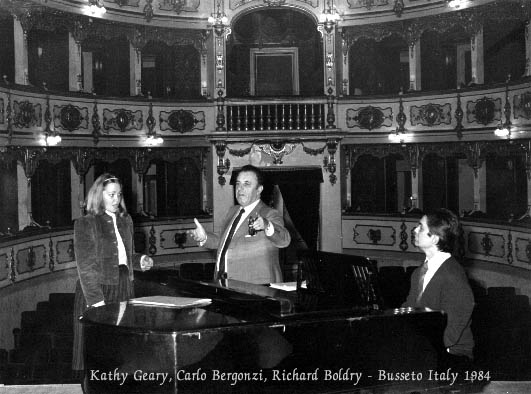 I'm at home today, relaxing and reading mail, and of course the endless sink full of dishes, but thought I'd write a little about my studies with Bergonzi.
I don't remember what city we landed in, but we went straight to the hotel, I Due Foscari, that Bergonzi owned. He was holding a master class for about fifteen American students. I had auditioned and won a scholarship. We went into a dinning room downstairs with an upright piano and red curtains around different pillars. Rather plush looking. We were all going to sing for him first thing. He usually spoke Italian to us, although ocassionally he'd speak english, as he did with me on the one or two ocassions we were alone together. I was so tired but the excitment gave me enough energy to sing. I did an aria from "Manon Lescaut - In quelle trine morbide". He let me sing the whole aria. Then started over. He told me to breathe before this one phrase and demonstrated taking a large noseful of air and singing the phrase at hand. He marked - which is singing half voice but with the technique of full voice. Hard to expain if you've never heard it. He's not more than say 5ft 7in tall but very larger than life. Very much an Italian male, macho, but also very deep, which you could see in his eyes. His eyes would like shine, I swear, they'd twinkle when he'd sing right at you. Even when he wan't singing full voice he had a beautiful color in his voice, full of emotion than didn't seem to need any words. Very inspiring. He worked with us in one on one lessons every day in the little village theatre, a small ornamented opera house. Imagine a little Carnegie Hall. A half round room with four balconies and floor seats. The whole place would hold maybe 600 people? A colorful mural on the domed ceiling, a wooden stage, great acoustics. When I wasn't singing with him I'd sit and listen to other's lessons. He taught for maybe six hrs at a time and his voice was always right there. He was an amazing teacher who taught mainly by example. Although he had a hand gesture to indicate lifting the soft palette - he'd raise his arm up with the hand bent down at the wrist and then he's repeat the up and down motion when he thought you needed more space in the mouth. He'd breathe loudly with you when he wanted you to breathe. He'd sing every phrase of every aria, bass, soprano as well as tenor, he knew all the repertoire cold.

His friends would come by to work with us. Anntonio Maddau from La Scala came to stage the third act of La Boheme. June Andersen stopped by. Will Crutchfield was there researching ornamentation in the manuscripts at the local library. But the big news was when Renata Tebaldi showed up. Wow. Not just the voice of a diva but the whole female counterpart to his Italian macho. She had a little poodle under her arm almost everywhere she went, except in lessons. Her maid of thirty years was always, always near her. She was grand and elegant and we worked on Desdemona's arias from Otello. I even sang a duet with Bergonzi once. He sang full voice - god what a day. I taped almost everything we did, but lost some of my posessions when I moved to NY in a storage room fiasco. So I only have three recordings and none of my lessons with Renata are in them. What a shame. She hardly ever sang, like Carlo did, but on the couple of ocassions where she demonstrated it was luxury. Her voice was hard to understand, the technique. But her expression was very strong and very moving. She could reach into one's soul. They must have been so amazing when they sang together all those years. She had a birthday while we were there and the lobby of the hotel was full of roses and reporters. Once when we took a field trip to Verdi's estate museum, I rode in Bergonzi's car, a damlier benz jaguar sort of car I'd never seen in america. He had a saint Christopher's Medal, or some saint, hanging from the rear view mirror. He needed it. We drove maybe 90 around the tiny little farm roads with 45 degree turns. Hang on! It was a breathless ride.

We took Italian language classes every day in addition to the voice lessons. Our coach was dedicated and demanding. She'd work with me one on one sometimes, speaking the words to arias over an over to get the diction and inflection just right, second nature. The first time I sang for the Italian public was in the local church on Sunday morning when I sang the Ave Maria from Otello. Scary. I could barely speak this language and singing in front of the natives was mind blowing. In addition to our final concert, I sang for a video taping that was broadcast on Rai - we worked on some of La Boheme with Renata. I still have a video of working with Carlo but I need to have it reformatted for the US - it doesn't play on a vcr or beta deck. I have a cassette tape of one lesson, and it's all in Italian. Maybe I'll put it up on the website too.

It's good to remember all this.

Bergonzi did a farewell concert in 1999(?) in NYC which was great. I didn't try to see him since it'd been so many years I didn't think he'd know me. It was sold out and people wouldn't let him leave the stage.

It's a piece of my life that I cherish. It was at the height of my dreams and one of the most memorable times of my life.

Top of Page | Back to the Living Room